Join us for a lively discussion about the mystery book of the month.

Do you love a good mystery? And talking about books? Join ICL’s Mystery Book Club as we discuss the book Broken Places by Tracy Clark.

Cops can make mistakes, even when they’re not rookies. If anyone knows that it’s Cass Raines, 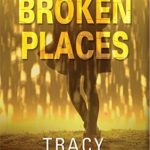 who took a bullet two years ago after an incompetent colleague screwed up a tense confrontation with an armed suspect. Deeply traumatized by the incident, Cass resigned from the Chicago PD, leaving one less female African-American on the force. Now she’s the head of a one-woman private investigation agency, taking on just enough work to pay the bills.

But when the only father figure she has ever known, a priest whose church has been vandalized, is murdered - she must do whatever she can to solve the case. Badge, or no badge.